Our website is made possible by displaying advertisements to our visitors. Please support us by whitelisting our website in Ad Blocker.
Skip to content
Before I start, I must say that I adore Sonam Kapoor‘s taste and style. She is one of those very rare celebrities who EXPERIMENT (Katrina Kaif I’m looking at you). And sometimes those experiments go slightly wrong. And that’s exactly what happened with her at the closing ceremony of Cannes 2012. Sonam wore a black gossamer Alexander McQueen Pre-fall 2012 gown with ruffled neck at the premier of ‘Therese Desqueyroux’. The thing is that this gown is mysterious and dark and gothic which Sonam is not. She is a fun-filled, bubbly, young girl and that is how she should dress. Looks like Sonam tried too hard and fell flat. Don’t get me wrong, the gown and Sonam both are pretty but not made for each other.

And those black pumps do nothing. They are just there doing nothing. I’m not sure what failed the look but it can be the mid-parted hair which adds so many years to her face. She should have gone for a streaky pulled up messy hair bun look. I like she is wearing red on her nails. 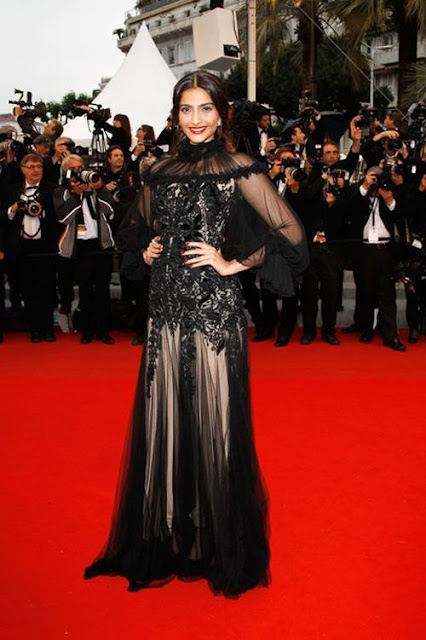 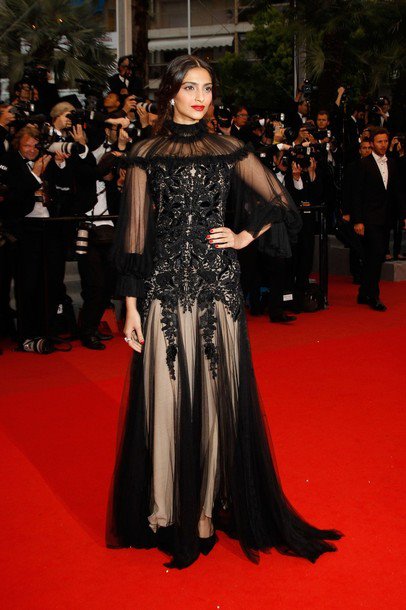 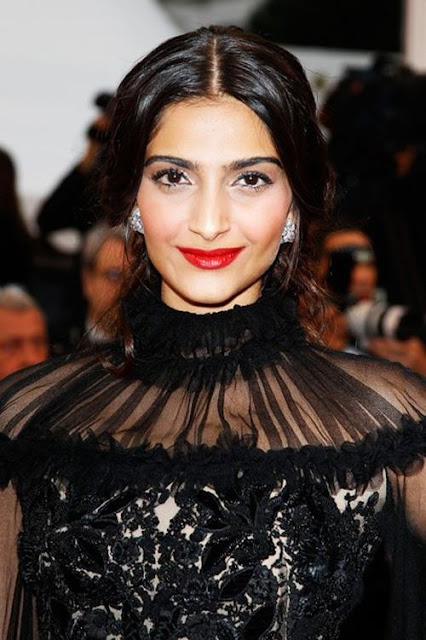 And now comes the makeup. I was waiting for hear to wear one of the 3 L’OR Electric lipsticks. While Fan Bingbing sported Burning Sunset on Day 1 and Sonam sported Sparkling Amethyst at the launch, I wanted her to wear Intense Ruby..which she did! Here are all the lipsticks swatched at one place: L’OR Electric Swatches .

I do like her bold makeup but sans that lighter foundation. She used L’Oreal True Match Liquid Foundation along with True Match Mineral Foundation.
On the eyes, she used L’Oreal Infallible Mono Eyeshadow Forever Pink (click for swatches) and liner her upper lid with Super Liner 24hr Gel Liner. And curled up the lashes with Volume Million Mascara (everybody at cannes wore this particular mascara, watch Eva Longoria applying it).
She used L’Oreal True Match Blush in 02 Rosy Cheeks (may be she should have tried a little less pink blush, as a rule blush and lips should belong to the same colour family or leave cheeks natural if you are unsure).
And now the star of the look, Color Riche Intense Ruby was applied on lips.

What do you have to say about her whole look? How to dress this Republic Day?